Today is the day we have been waiting for for a long time!

The award-winning documentary American Circumcision is now available on DVD, Blu-Ray, and many different streaming services. 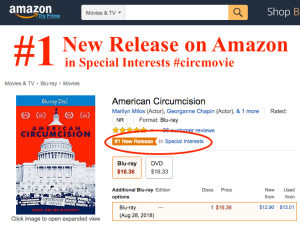 This is a must-see, and we’re happy to have been involved with the making of what is sure to become a landmark presentation on this issue. We believe that it will be seen in the future as one of the turning points in exposing this issue to American society.

We’re quite aware of the difficulty of spreading our message to a wide audience. As Brendon Marotta, the film’s director, says in a press release, “When you begin discussing this issue, you’ll find that people have false beliefs about even the most basic facts regarding circumcision.” I’ve seen it in discussion after discussion. We’re not just up against a deeply-embedded American tradition, we’re up against the task of revealing the truth to parents who trusted their doctors and nurses with their child’s well-being. And that truth can be quite painful.

In terms of content, this issue is approached in a very frank and honest, and compassionate way. Some scenes might be objectionable to certain viewers. Topics of sexuality are also discussed at length. An actual circumcision is shown, but there is an on-screen warning before it comes on in case you want to look away.

Here is the trailer, in case you haven’t had a chance to see it yet:

Why should Christians see this movie?

Frankly, because Christians in the United States are one of the largest groups who still practice circumcision. If you’re new to this topic, I wholeheartedly recommend that you take a look at our blog and check out our informational pages to find out why routine infant circumcision is unhealthy, unhygienic, unnatural, unkind, and unchristian.

Many Christian parents choose circumcision because it’s in the Bible, or because God commanded it of Abraham in Genesis 17. Others do it for ‘medical’ reasons, but these have all been debunked. Even the AAP has, in recent years backpedaled away from recommending it for any valid medical reason. In fact, the head of the 2012 AAP Task Force on Circumcision, Andrew Freedman, defended his statement that the “benefits outweighed the risks” in a response that appeared in Pediatrics in 2016. He was responding to four years of scrutiny by major medical establishments around the world who said his methodology was deeply flawed. Here’s what he had to say:

Most circumcisions are done due to religious and cultural tradition. In the West, although parents may use the conflicting medical literature to buttress their own beliefs and desires, for the most part parents choose what they want for a wide variety of non-medical reasons.

We find that this includes many parents here in the American Christian community. But many Christians elsewhere in the world are shocked to learn that this is true. They view it as a lack of respect for God’s wise creation and a clear violation of basic medical ethics. 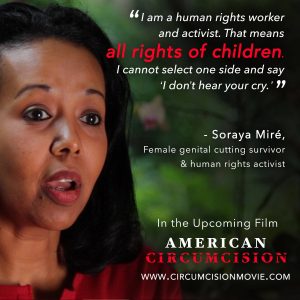 Even if you’re finished having kids, have only girls, or don’t plan on having any children, we still encourage you to watch this film. Education is important, and the more people in our culture know the truth about this issue, the more commonplace an understanding of the truth behind this issue will be.

Watch it, share it, pray about it, and if you’re convicted to, help us get this message out.

Did you watch American Circumcision? Tell us what you thought about it in the comments below: