A medical professional has reviewed this blog post to ensure accuracy. 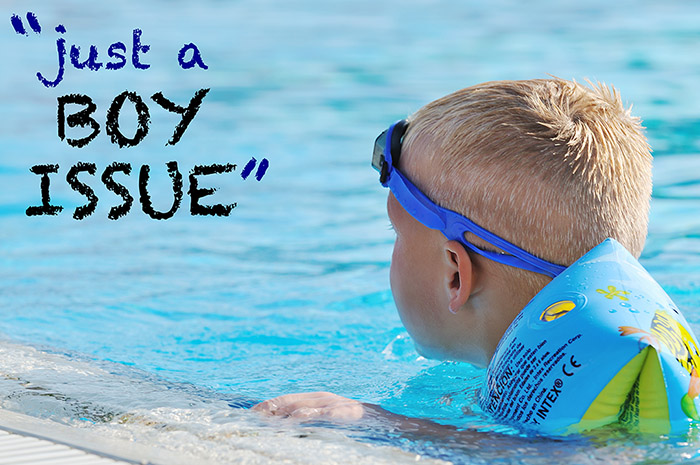 Sitting by the side of the pool each morning for 2 weeks of swimming lessons, with a group of moms I'd never met before, we often talked about our kids, the hot weather, weekend plans for camping. The usual chit-chat.

But one morning, a concerned mom exited the restroom with her toddler and immediately asked me something. "This is a weird question, I know, but you have 3 boys. My son has a crack coming from his pee-hole down over the top of the penis. Is it some kind of rash? Do you think it will heal on its own? It has been getting worse, and I think I should take him in to the doctor." I responded that we'd never experienced anything like that and it didn't sound normal: probably time to see a doctor.

I don't know how things turned out for that boy at the pool. I hope that he was able to heal easily. But I do know that he had been circumcised, as that had come up in a previous conversation. In all likelihood, this was the reason behind the problem he was having.

It would be incredibly rare for an intact toddler to experience a cracked, irritated, or scarred and narrowed meatus because the foreskin would be doing its job as God designed: to cover and protect. Germs, dirt, and diapers wouldn't be irritating the glans and meatus. Meatal stenosis – rare in intact boys but quite common in circumcised boys – is when the meatus gets too narrowed or scarred and usually has to be cut open in a procedure called a meatotomy. In some cases when the meatus begins to tear or crack, skin grafting surgery is needed to fix it.

Adhesions can form when the cut skin attempts to heal itself, and the healing skin heals "stuck" to the glans. One study showed that a full quarter of circumcised boys under the age of 3 had adhesions. Most doctors treat these by ripping them back off the glans, though sometimes they resolve on their own.

Skin bridges are another issue that can be present at any age in circumcised men and boys. Like adhesions, skin bridges are a result of cut skin healing and connecting in the wrong place, forming a bridge. Sylvia, a volunteer here at Little Images, sees skin bridges frequently in her work in the emergency room. The adult patients, or the parents of children with skin bridges, often think that they are "normal" or that they have always been there, but they are a circumcision complication. Skin bridges can cause a variety of problems: hygiene issues, infections, and discomfort or pain during activities, including sex.

Cracked skin, adhesions, and skin bridges are not normal, nor are they unfortunate things that just happen sometimes. They are not "just boy issues" – they are circumcision complications.

I have had people wonder out loud to me, "but I and my brothers and my cousins and every male I know of is circumcised, and I've never heard of anyone having a problem." Many males simply don't know that their problems are attributable to circumcision. They think these are normal things, common to all males. Parents sometimes refer to a son's problem as "just a boy issue." And even for those who do know that circumcision is to blame, this isn't exactly the type of thing that people talk about openly at family potlucks or church game night.

So in most cases, men and parents don't know the reason behind these problems – or just avoid mentioning them entirely. But based on simple statistics, I can guarantee that someone you know is suffering from or has experienced a circumcision complication.

I guarantee someone you know is suffering from or has experienced a circumcision complication.Click To Tweet

If you or your child are experiencing one of these complications and thought it was just "normal," perhaps there is a treatment that can relieve some of the problem.

But prevention is the best medicine. Expecting and future parents, you can choose to spare your son the trouble of all these complications – including many not even mentioned in this post – by keeping him as God designed.