Worthy are you, our Lord and God, to receive glory and honor and power, for you created all things, and by your will they exist and were created. ~Revelation 4:11

Respect is a big deal to Christians. The Bible says over and over that we are to respect God and show respect for his creation, for each other, and for ourselves. In 1 Corinthians 6:19-20, Paul says for Christians to keep their bodies as “holy temples” to God, who made us in his image. In other words, by keeping our bodies in good health, we show respect to God and his creation. Likewise, as we are all made in the image of God, we respect each others’ bodies as well.

With the issue of circumcision in mind, we need to first recognize some things. God commanded Abraham to circumcise himself and his son, family, and descendants in Genesis 17. This was done as a blood covenant – a costly sacrifice – before the coming of Christ. Consequently, fathers were to sacrifice a vital part of their sons. It was meant to be difficult, hurtful, and sacrificial. It was an intentional disrespect of their sons’ bodies, as a foreshadowing of the disrespect that we would show Christ on the cross. There was a necessary illogic in the practice, a way of acknowledging, “I know this doesn’t make any sense, but God commands it, so I must.” Click here for one rabbi's take on this.

However, it should be noted that the actual practice of Old Testament circumcision (brit milah) – a “mark of the covenant in the flesh” – is vastly different from the modern practice, which was modified to add brit periah – total excision of the prepuce.

This was directly linked to the idea that God would allow His son to be painfully sacrificed. Upon Christ’s death on the cross, the compulsion for this sacrifice was absolved. Paul makes it clear in the New Testament that the practice of circumcision of the flesh was now unnecessary, harmful, and counterintuitive to God's plan of salvation – the “circumcision of the heart.”

The practice was unheard of in the early church, but was brought back into practice in Victorian times as a punitive measure to keep boys from exploring their developing feelings of sexuality. Thus, a ritual cutting in honor of a blood covenant became a punitive, damaging measure designed to bring shame and hurt upon young men. This form of the procedure is the one that still is practiced on around 50% of newborn American boys every year, many of which are born to Christian parents.

For you formed my inward parts;
you knitted me together in my mother's womb.
I praise you, for I am fearfully and wonderfully made.
Wonderful are your works;
my soul knows it very well. ~Psalm 139:13-14

I have two sons. As a Christian father, I have been given the Godly responsibility to raise them into men of God. I want to raise them to become faithful servants of their almighty Father, to respect me, their earthly father, and to ultimately become loving husbands and fathers of their own, if God wills it.

I believe that when they were born, they were born in the image of God, perfectly designed in His infinite wisdom to be equipped with unique gifts, talents, and abilities that they will be able to use to better the lives of those around them, help those who God puts in their lives, and ultimately leave a legacy of their own that lasts long into future generations.

Being that I understand that under the New Covenant, I am no longer obligated to follow through with the blood covenants of the Old Testament, I recognize that they come with no disassembly required.

Under the New Covenant, my sons come with no disassembly required.Click To Tweet

However, there seems to be a trend in the American church that reverts to the misunderstanding of this notion. If you ask ten different Christian parents why they had their sons circumcised, some will inevitably say, “It’s in the Bible, isn't it?” However, we know that this is indeed not the case, but it is still taught as such in many circles.

Other parents will say, “We did it because it’s cleaner.” Although this is touted by American organizations such as the AAP, it has been thoroughly disproven. In fact, the American idea of “prophylactic amputation” is scoffed at by men in the rest of the Western World, who live their lives happily and healthily intact.

Here’s the problem: if we, as Christian parents, believe that God made our sons in His image, and that we need to respect His design and will for our children, why do so many of us now go and alter that design to fit a custom that God never intended should continue in the Church?

We raise our sons to be fierce warriors of God. We are called to equip them in the full armor of God – the Helmet of Salvation, the Breastplate of Righteousness, the Sword of Truth – but one of our first acts as parents all too often is to cut part of his most sensitive, private area off because it’s “cleaner”?

In other words, we expect our sons to carry the Word of God to the nations, to fight the powers of darkness alive and active in the world, and to become conscious, successful adults who change the world ... but we believe them to be incapable of cleaning themselves properly?

We raise our sons to be warriors of God ... but believe them incapable of cleaning themselves?Click To Tweet 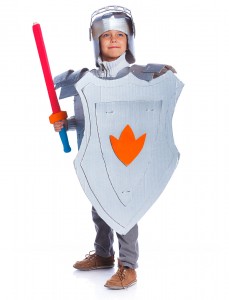 Unfortunately, much of the “cleaner” notion comes from a misunderstanding of proper intact care. Many parents are under the assumption that one must pull back the foreskin to clean under it. This is the opposite of what needs to be done. As part of His design, in His wisdom, God designed the foreskin to not retract before it needs to in order to protect it from infection or unnecessary manipulation. As a boy approaches puberty, the foreskin begins to separate from the glans, at which point a boy should be taught to pull it lightly back in the shower and rinse it with water.

God designed the foreskin for protection. When we remove that protection, we disrespect His design. We disrespect the man who the boy will grow up to be. And we disrespect the boy in his infancy, too. Hannah’s last blog post touched on the idea that babies feel pain, but do not have a means – aside from crying – to articulate their pain. How much pain is a newly-circumcised boy in? How do we know? How are we respecting his right to a whole body or the need to not experience more pain than is absolutely necessary by putting his wounds in a feces- and urine-filled diaper, not knowing what he feels or how much pain he is in?

What would we say to the man who comes and asks us, “Why did you allow that to happen to me?” Wouldn’t it be better to say, “I didn't do this to you, because I respect God's design, I respected your right to live life in your body as God designed it to work, and I respect the man of God you have become”?

Why not leave God's design for your son intact?