“A lie can travel half way around the world while the truth is putting on its shoes.” -Charles Spurgeon

Which of the following stories have you heard people tell when circumcision is brought up? 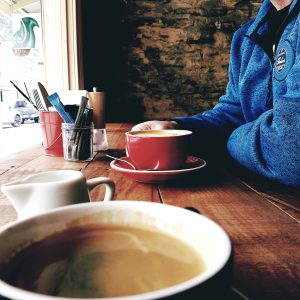 I’ve heard them all. I’ve heard them from educated people, from well-known and respected people, from people who profess Christ as their Lord. These are common arguments used to justify the practice of circumcising baby boys. They are based in the fear that a, b, c, and d will happen to their son in the future.

For each of these “I heard from a friend” stories there are a lot of questions to be asked. Probably there’s a grain of truth, but maybe the story got changed like a game of telephone, or maybe the doctor quoted in the story didn’t have it right. It’s hard to say.

Should we be repeating these stories if they’re only half true?

Even if these events did happen exactly how they were described, how does that relate to circumcising a healthy baby?

But before we jump into detective work on these anecdotes, wouldn’t it be wise to back up a minute? Instead of forming a position, or even a permanent decision, based on hearsay, let’s go to the truth.

In the beginning, God created the heavens and the earth.
(Genesis 1:1) 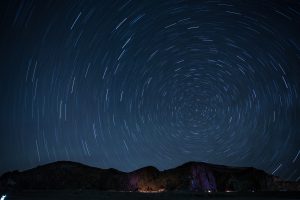 Ok. So that’s a good thing to keep in mind. Christians believe human beings are one of God’s creations, and He created them very good. This is one truth to start with: God designed our bodies and that design is very good. The foreskin is part of God’s design for our genitals, and the foreskin is also very good. Humans are made in God’s image and therefore deserve the highest consideration and respect we can give.

The “good” of the foreskin is that it protects the glans from dryness and callousing, protects the meatus (urinary opening) from irritation and scarring, contains nerve endings that give sexual sensitivity and control, and is part of the mobile and flexible skin system of the penis that is important during sex.

We also read in the Bible that disease and death have entered our world, and sometimes our good bodies have problems.

You might be thinking, “Isn’t it OK to circumcise because it might prevent disease? Everything isn’t always ‘good’ in our world now and we have to be careful. Doesn’t this fall within the realm where we can make a choice either way based on being a good steward of our child’s body?”

God does call us to be good stewards with our health – this is another truth!

But what is a steward? A steward is someone who takes care of what he has been given.

We are good stewards of our sons’ bodies when we care for them properly. Removing body parts from our children when those parts are in a healthy state and functioning as intended is not proper stewardship.

Also consider that there is no disease that circumcision supposedly prevents that can’t be dealt with (i.e., prevented or treated) in a much less invasive manner, the same as we would do for other body parts. Circumcision for a medical diagnosis such as an injury, existing cancer, gangrene etc. is rare. Those are the times when stewardship involves making choices as to how to treat an existing problem. But when our body parts are healthy, there are no decisions to make about whether to keep them or remove them.

Aside from existing medical problems indicating circumcision, there are no valid medical reasons to circumcise an infant. In fact, did you know that the reasons people give for circumcision have changed every couple of decades or so? Meanwhile, circumcision introduces lots of new problems to the body because it causes what was designed to be an internal organ (the glans, or tip of the penis) to now become external and dry. Also, the urinary opening, or meatus, can scar up and start to close, called meatal stenosis.

That’s not hearsay; it’s something that can be regularly observed, recorded and measured. God’s creation itself is also a source of truth and unanimously we can tell that circumcision is not necessary for healthy infants, and we can also see that it is actually harmful. It’s not recommended by any medical organization. Circumcision is only practiced in societies that believe that foreskin is dirty, useless or highly prone to disease – and all of those don’t match up with God’s truth. 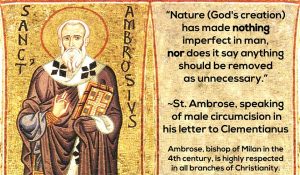 Many prominent voices in Christianity have denounced circumcision as a destruction of God’s perfect design.

What we know from the Bible is that Satan loves lies.

He loves for us to become obsessed and convinced with half-truths. He may even whisper in our mind, “Did God really say…?”

Did God really say that everything he created is very good?

Does God really care about a little decision like this…?

Just do whatever you prefer.

The risk is insignificant.” 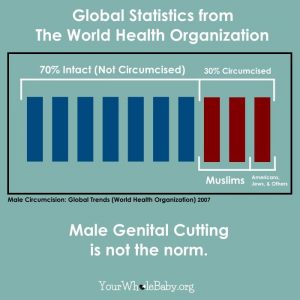 Cutting has never been a Christian practice. We often need to look beyond our own cultural understanding of things in order to see the truth in certain matters.

In addition to lies, Satan is also a big fan of fear. It’s easy to let the story of the man who got penile cancer and wasn’t circumcised (never mind that he also smoked, or that circumcised men can also get penile cancer) to get stuck in our head, and we fear. We let fear of a worst case scenario color our decisions, while we ignore millions of men and boys who are whole, healthy and happy with their bodies.

For families that have already had a son circumcised and are now just being told that the ‘medical’ reasons that convinced you were not valid or true: I ask you to open your heart and mind to this new information and be willing to do things differently based on the new information you now have. We all make decisions based on the information we have at the time, but we should not let past decisions cloud our judgment when we are faced with new information that presents a more accurate picture. If more sons aren’t in your future, you can honor God’s truth by not spreading half-truth-half-lie stories about circumcision, or by speaking truth to those who are expecting baby boys.

We can certainly still discuss your neighbor’s grandma who got cervical cancer- in all honesty. The doctor who claimed it was because of her husband who was not circumcised was giving his opinion based on culture or very flawed research that is no longer accepted. We can look at the studies together so that you don’t have to fear keeping your son intact.

But above all start with the truth. Start with God’s Word. Rest in the truth: that God created your son very good and that He will protect him in the future.

“Fear is born of Satan, and if we would only take time to think a moment we would see that everything Satan says is founded upon a falsehood.” ~ A. B. Simpson